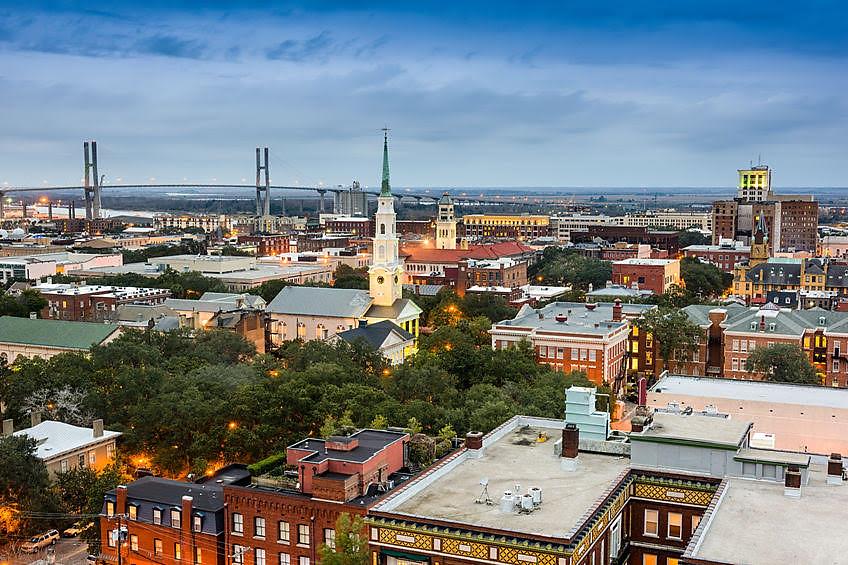 Tucked away in the Deep South surrounded by moss laden trees and the relaxing sounds of the river, is where you’ll find the oldest city in the state of Georgia, Savannah. With that quintessential Southern hospitality, Savannah has always been one of the most visited Southern locales. Eager to show off her beauty and unique background, Savannah was even designated in 1966 as one of the largest National Historic Landmark Districts in the country! With a long and colorful history, it’s no surprise that Savannah has a story or two to tell. From the fascinating individuals who called this place home to the stunning and well-preserved architecture and manicured parks, Savannah is a city perfect for exploring on an educational student tour. It’s a charming escape where one can slow down and appreciate the art scene, admire the historic buildings, savor something delicious, and get to know the spooky side through a ghost tour. Come and discover what makes Savannah live up to its nickname, Hostess City of the South.

There’s so much to see and do in Savannah, that you’ll have no problem creating a Savannah student tour itinerary that has a little bit of everything. Whether you want to enjoy nature strolling around Forsyth Park, explore the city’s rich history through Old Fort Jackson and Bonaventure Cemetery, or view art pieces on display at the renowned Telfair Academy, it’s easy to fill your days in Savannah.  No matter where you begin your Savannah student tour, no visit to Savannah is complete without visiting the Historic District.  Sure to thrill those who love all American history, the Historic District is where you’ll find museums, churches, mansions, and so much more! Street after street is filled with stunning homes and unique architecture that are different than the one beside it. Lush with vegetation and intricate details, the homes in this area are amazingly picturesque. You’ll see such styles as Federal, Victorian Regency, Greek and Gothic Revival and Italianate.  See if you can find them all on your Savannah educational tour.  A must for any Girl Scout, such as myself, is a visit to the Juliette Gordon Low Birthplace. Lovingly referred to as the “Girl Scout Mecca,” Juliette Gordon Low was the founder of the Girl Scouts and lived her childhood in this home which is now a Historic Landmark. Built in the early 1800s, visitors will be able to tour the mansion and learn about the Girl Scouts, their founder, and what life was like during that era. As you continue your Savannah student tour, it’s hard to not feel a sense of eeriness in the city… after all Savannah is one of the most haunted places in America.

When you feel brave enough, be sure to visit Bonaventure Cemetery. One of the hallmarks of the city, Bonaventure Cemetery is hauntingly beautiful. The cemetery was developed on Bonaventure Plantation, which is significant in its own rite.  Originally purchased for use as a private cemetery in 1846, it later became a public cemetery in 1907. For more than 150 years, this charming site has lured tourists to its tree-lined avenues to admire the beautiful obelisks, abundance of flowers, ivy-covered crypts, unique sculptures, and the notable people who are at their final resting place.  Students and educators will also learn about the vibrant folklore that’s associated with this hallowed site and its people. If you’re familiar with the book and movie “Midnight in the Garden of Good and Evil,” Bonaventure Cemetery plays a huge role. It was here where the famous “Bird Girl” statue was kept until being moved to Telfair Academy.

You can’t go on a Savannah educational student tour without visiting a museum, right? With so many catering to different tastes, Savannah is no stranger to sharing its history with all who visit. A great one is Telfair Academy! Designed in the neoclassical Regency style by British architectural prodigy William Jay, Telfair Academy is a former mansion built in 1819 for Alexander Telfair. Alexander was the son of Revolutionary War patriot and Georgia governor Edward Telfair. In 1875, Alexander’s sister Mary, heir to the family fortune, bequeathed the house and all its furnishings to the Georgia Historical Society in exchange for it to be opened as a museum. As mentioned, “Bird Girl”, made famous by the Jack Leigh photo on the cover of Midnight in the Garden of Good and Evil, can be found here alongside the museum’s permanent collection of American Impressionism. Telfair Academy makes for a great afternoon of learning and reflection on any Savannah student tour.

With Savannah being one of the country’s first planned cities, there’s no doubting it’s full of history as well. With numerous museums, stunning churches such as the Cathedral of St. John the Baptist, and stately historic homes, Savannah is a city with a never ending list of attractions. Students and educators will have the time of their lives exploring all that this fabulous city has to offer. Maybe you want to sit on the bench made famous in the movie “Forrest Gump” or stroll along the riverfront in the evening, whatever you fill your days with will be both fun and educational! Savannah is a town that radiates Southern charm and will leave you wanting more. Will you let this city play host on your next student tour?